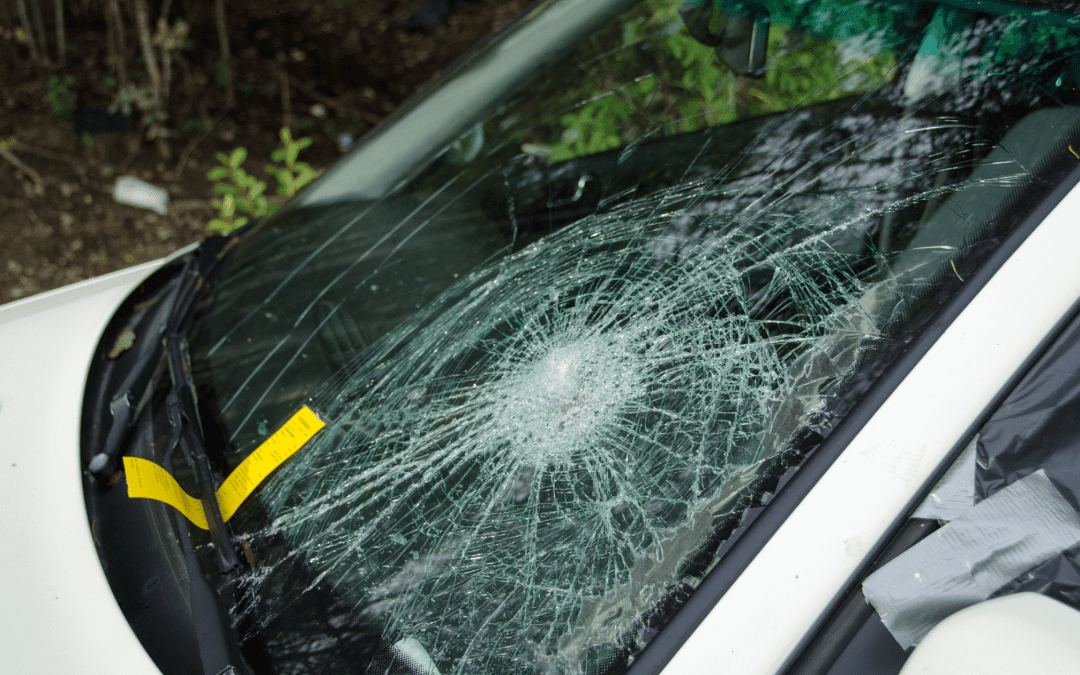 We all know windshields and windows come in all different shapes and sizes. And surprise, surprise – windshield damage does too! There are a variety of different chips and cracks that can interfere with the driver’s line of vision or affect the structural integrity of the windshield, making it dangerous to be driving around. The most common cause of a chipped or cracked windshield is a rock or piece of gravel, but there are other random things that have been known to cause windshield damage as well including: tires, axles with the wheels still attached, tow hitches, hauling materials (tree branches, tools, etc.), and even stranger things like gallon jugs and pumpkins. Yes, you read that right. Pumpkins 🎃!

Another fairly common cause of windshield damage is animals. Yup, animals! Maybe you’ve experienced it yourself, or have been driving behind a car that runs into a bird and all you see is that large “poof” of feathers in the air, but it happens. It may not be as typical of an occurrence as a piece of gravel, but if it has happened to you, you likely won’t forget it! Have you ever been curious as to what type of animals, from the common to the more surprising ones, that have caused windshield damage?! Let’s find out!

If we all went to look at our windshields right now, I am betting we all would see at least one smashed insect on it. Or if you’ve just come back from a road trip, you might see dozens of various insects. Bugs are the most common living thing to smash into your windshield, but luckily, don’t cause windshield damage! So, although annoying (and maybe sad for that little bug or butterfly that was in the wrong place at the wrong time), all that really needs to be done is to give your windshield a good cleaning!

This one might not surprise you at all. And it shouldn’t. Birds are one of the most common animals to cause windshield damage. Honestly, I can’t even count how many times I have *almost* run into a bird while driving. It seems like they would know by now to fly just a little bit higher and their lives would much safer, but alas, they are birds 😆. Even if you aren’t driving super-sonic speeds, the bird will likely cause some sort of windshield damage, ranging from a little cosmetic mark to small chips and large bullseye cracks. The type of windshield damage largely depends on bird type, bird size, and speed at which you are driving. So, what kind of birds have been known to cause windshield damage?

Pigeons and Doves 🕊 – these birds are the ones you see on the side of every road in every neighborhood in Arizona. They may be little, but under the right circumstances, can cause fairly significant windshield damage.

Wild Turkeys 🦃  – we don’t see a ton of wild turkeys in the Phoenix area, but if you go up north, you may run into a turkey or two. And wild turkeys have been known to cause some pretty significant windshield damage. Experts say that it is most common to hit a wild turkey while driving during turkey mating season. These randy birds are trying to find one another and may not be paying great attention to your car if it doesn’t look like something it wants to mate! Unfortunately, wild turkeys are large and heavy and can completely destroy your windshield under the right circumstances.

Owls, Falcons and Hawks 🦉🦅  – although not nearly as common, there have been accounts of owls and other large birds like falcons and hawks causing chipped or cracked windshields. So, if you like to drive around at night, beware of any owls that may be lurking!

Seagulls 🦤  – if you leave near a beach, you might have sustained windshield damage either directly or indirectly from a seagull! Seagulls often fly with items such as seashells and are known to drop it while flying. If drops something from any type of height, it will likely cause at least a chipped windshield. Seagulls have also been known to cause direct windshield damage. Likely a result from busy beaches on vacations, seagulls love human food. All kinds of human food. And if it is flying towards something that looks yummy, and it happens to cross your path while driving, the size of seagull makes it certain to damage your windshield.

Yes, you read that right. Reptiles have even been known to cause windshield damage.

Turtles 🐢 – although turtles are slooooow moving animals, there have been accounts where a car has hit a turtle crossing the road, causing the turtle to propel into the windshield of the vehicle driving behind. Wow! I’m sure both the turtle and driver were pretty surprised! As you know, turtles have an extremely hard shell protecting their body. So, while they make survive this incident (yay, turtle), your windshield likely won’t and you’ll be needing a windshield replacement stat.

Snakes 🐍 – this must be a joke, right?! Not really! Although snakes haven’t been known to cause windshield damage, they have been known to hide under the hood and slither out onto your windshield while driving. Why?! Your guess is as good as mine – I would think some of those parts under the hood get HOT, so the snake is trying to cool down a bit . Although this may not cause a chipped or cracked windshield, if you’re like me and hate snakes, I might opt for a windshield replacement anyways !

Let’s get into the super rare incidents involving animals and windshields.

Ponies 🐴 – a couple from the United Kingdom reportedly ran into a pony who was running from a dog, causing their windshield to “explode.” While we don’t have a ton of ponies in the Phoenix area (at least not running around in the wild), some places still have a lot of farm land with horses, cows, sheep, goats, and other animals, so keep your eyes peeled when driving in farmland.

Seals 🦭 – this may be a one-time world-wide incident, but a family in Australia has an incredibly unique experience. A large fur seal was apparently seeing what it’s like on land, and while wandering around town one day, decided to take a rest on the family car, shattering their windshield and denting the roof of the car. Being a tourist is exhausting sometimes! 

Deer 🦌 – that’s right, deer! If you’ve ever lived anywhere where deer populate, it is super common to see dead deer on the side of the road after an unfortunate meeting with a moving vehicle. Deer love to come out in the early morning and right around sunset to feed, and this type of lighting can make it very difficult for them to see us and for us to see them. That, combined with the sheer size of deer, makes for pretty significant windshield damage.

Are driving around town right now with a chipped or cracked windshield? Whether you got it from a rock, a bird, or even a deer, Auto Glass 2020 can fix it! The technicians at Auto Glass 2020 are the best in town for windshield repair and windshield replacement! Our clients are like family to us, and we want to help keep you and your family safe! Call Auto Glass 2020 today at (480) 283-7751 or get a quote here!